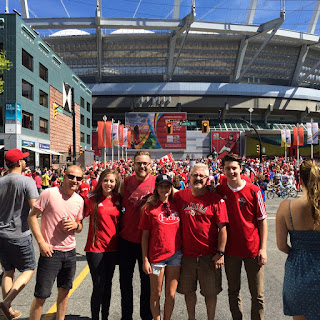 Here is my clan at yesterday's Women's World Cup game in Vancouver, BC.  From left to right, Tom (my daughter Dani's boyfriend), Holly, Peter, Dani, Darin and Joey.

It was an awesome way to spend Father's Day for our soccer crazed family.  And, even better, Canada beat Switzerland 1-0 and advances to the quarter finals.

We will know later today whether Canada plays England or Norway.

Tom is from England so we are hoping that England makes it through as it will make for a very exciting and competitive match both on and off the field. 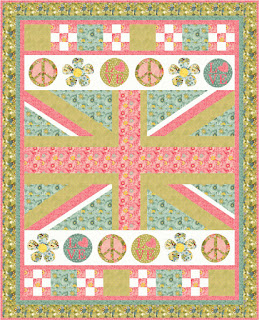 I have not designed a soccer themed quilt but it will happen one day.  In anticipation of next Saturday's potential match up, I present my Flower Power quilt. When I saw this fabric line "Lulu" by Chez Moi, it immediately reminded me of the 1960's and hence the flowers and peace signs - and the British Flag to represent the British Invasion by the Beatles, Rolling Stones and all the other amazing rock bands that came out of the UK.  It also reminded me of one of my favorite movies "To Sir with Love" starring Sidney Poitier.  The movie's theme song is performed by "Lulu".

Tom is a bit of traditionalist and wasn't interested in my pink British Flag even though I offered it to him to hang in his apartment.  Oh well, I like it and I hope you do too. Click here to check it out on my website.
Posted by Barb Cherniwchan - Coach House Designs at 1:04 PM